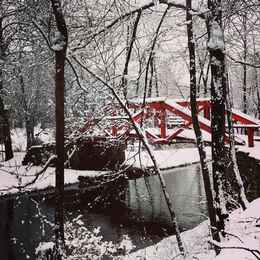 The first snow day of the year is always magical, no matter how old you are! Peering outside my window I could see that the beautiful snow blanketed tree limbs, outlined fences and clung to wreaths hanging throughout the town, a scene right out of a snow globe. Having an apartment nestled in the middle of Yardley Borough gives me great access to the Yardley Canal. Every season paints a new picture while strolling along the canal, and with everyone snowed in, I just had to capture the pristine snow-covered trees along the towpath. After finishing breakfast, I laced up my boots and trudged through half a foot of snow to the canal with my camera in hand. The canal was nearly frozen over, not yet ready for skating. Kids pulled their neon colored sleds and built snowmen along the banks. While the snow settled around me, I took in the tranquil scenes while snapping a few photos here and there. The red bridges that span parts of the canal shown bright against the crisp white snow covered trees and offer the most brilliant of photos. What a pretty picture nature painted during that lovely snow day in December.

Learn more about Yardley and the Delaware Canal.